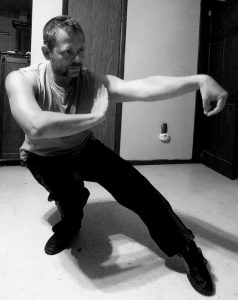 Asst. Instructor Wade, in a xubu stance typical of chaquan.

One of the most influential styles of Chinese martial arts, chá quán (查拳) was developed by the Jiao Men, or Muslim Hui people of Shandong province.

The story goes that a famous Muslim general, Hua Zong Qi, was on a military campaign and was seriously wounded. He was cared for and nursed back to health by the villagers of Xin Jiang. In appreciation for their care of him, he taught them his style of martial arts, jiazi quan. His instruction became so popular that he asked his senior student, Cha Yuan Yi, to come and teach as well. Hua Zong Qi’s style was called dajia quan, or big frame fist, while Cha’s style was known as xiaojia quan, or small frame fist. After their death, their disciples changed the name of their style to Hua Quan and Cha Quan respectively in honor of their teachers.

Hua quan has 4 routines, simply referred to as:

The most popular and famous routines are the 4th and 5th lu.

There are three main branches of Cha quan: Zhang, Yang, and Li.

The style is characterized as being open, graceful, clear and concise, continuous, rhythmic and utilizes many hand techniques as well as kicks. Cha quan served as the primary basis for modern changquan and most of the duan compulsory forms take their techniques from Cha Quan.