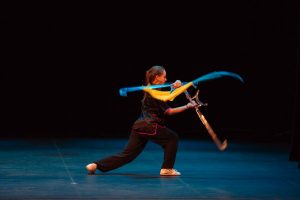 Among the more unique (and rather mysterious) weapons in Chinese martial arts is the hook sword, sometimes called the “tiger head hook” (hǔ tóu gōu, 虎头钩) but most often simply referred to as “double hook” (shuānggōu, 双钩) because they are used in pairs.

Like the straight sword (jiàn, 剑), hook swords are double-edged weapons, with a point below the grip, a large crescent-shaped guard by the grip, and a characteristic hook of the blade at the tip. The earliest examples of this weapon are from the Qing era (1644-1912), making them a relatively new weapon. They are thought to be civilian weapons – never appearing in any of the official listings of Chinese armaments – but surviving sharpened examples indicate some actual use as a weapon. Given their complex construction and the level of required training to use, they were most likely rare.

Unfortunately, beyond what has been found through art and surviving examples, there is little information on the development of this weapon and its various features. Most modern routines are flashy and fluid, and some techniques involve linking the hooked ends to create a single long, flexible weapon.