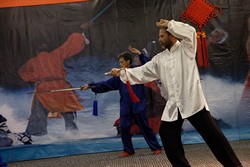 Taichi, originated in China, belongs to the world. Taichi means supremacy, absoluteness, extremity and uniqueness. Taichi exercise, in Chinese is called Tai Ji Quan. Tai Ji Quan takes its name from the implication of superiority. Tai Ji Quan is a branch of Wushu studied for health and self-defense, practiced at a slow, smooth pace with controlled breathing. It's an extremely effective therapeutic exercise for stress reduction, hypertension, body balance, coordination, and keeping fit. It has been widely practiced among the people of China since the 16th century. 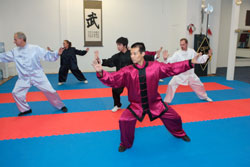 According to Chinese Yin and Yang philosophy, there are two opposing complementary principles in nature: Yin, the feminine and negative, and Yang, the masculine and positive. Wushu masters use this philosophy of positive and negative to explain the principles of Taichi exercise.

Tai Ji Quan was established during the Qing dynasty (1644-1911) by Wong Zong Yue, who utilized the principle of Opposites and Philosophy of traditional Chinese theories to explain boxing, then he wrote a paper entitled "An Introduction to TJC". Since then the name of TJC was well accepted by ordinary people.

There are five styles of Tai Ji Quan. They are Chen-style, Yang-style, Wu-style, Sun-style and Wu*-style. Of the five, Chen and Yang are the most popular and widespread worldwide. Although different in style and form, all Taichi exercise routines require their practitioners to be tranquil, calm, and relaxed yet concentrative. In Taichi exercise, the spine is the pivot around which the rest of the body moves. Force and energy should be generated from the spine and waist before reaching the legs and arms. The movements are executed slowly, continuously and softly, but hardness is implied within the soft movements. 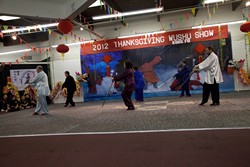 The exercises require a high degree of concentration, with the mind free from distractions.

The movements are slow and uninterrupted, like a flowing stream.

Breathing is natural, sometimes involving abdominal respiration, and is performed in rhythmic harmony with the body’s movements.

From the viewpoint of sports medicine, these characteristics are important factors contributing to the prevention and treatment of diseases. According to an individual’s age and health condition, one may select a suitable exercise capacity. That is, you may choose just a few steps to practice repeatedly, or practice the whole program.

It can improve the general health; prevent degeneration from aging or weakening physically.

Our Tai Ji classes, whether group or private classes, are taught in a similar progression. Individual movements are first learned, then forms are learned, some sessions learning several steps while other sessions are set aside for self-practice to internalize and master the movements learned. Both the student and Sifu work together to set a pace that is both challenging and productive.