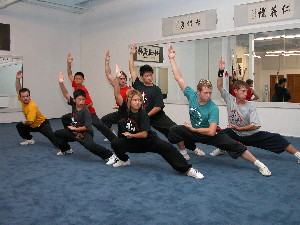 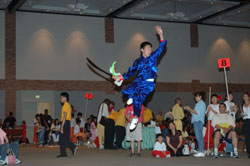 Today, Wushu is the National Sport of China and is practiced at the local, provincial, collegiate and international level by thousands of people. It can be likened to Football here in the US, with local recreational teams, collegiate teams and Professional teams. There are local schools for Wushu as well as collegiate teams and government sponsored professional teams in each Province. Wushu is being considered as a new sport to debut at the 2008 Olympic Games is Beijing, China. 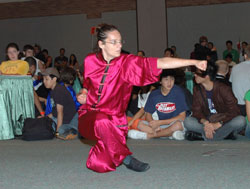 Wushu, more popularly known outside China as Kungfu or Chinese Martial Arts, derives from a variety of ancient Chinese Martial Arts with distinctive oriental cultures and it can be traced back to 3000 B.C. Over the last century Wushu has permeated throughout the world and is favored and practiced by people with different cultural backgrounds for its unique competitiveness and health benefits. 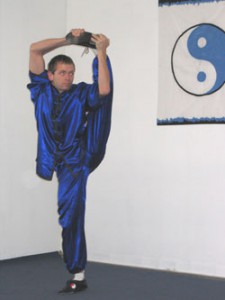 Although you may have never before heard the term, I am sure you have been exposed to Chinese Wushu. Movies such as Hero, Crouching Tiger, Hidden Dragon, and films by Jet Li and Jackie Chan have all made wushu popular in the US. The term “wushu” comes from 2 characters in Chinese. The first character, Wu, means “martial” or “fighting”. The second character, Shu, can be translated as “art”. So the term Wushu literally means “martial art”. Wushu is synonymous with the more common term, Kungfu: a term literally meaning “learned skill” or “hard work” and actually originally referred to any skill that could be acquired through hard work. Kung Fu can be used not only to refer to the Chinese martial arts, but also other skills such as cooking or furniture making. Wushu is not simply a method of training to fight, but a complex system of techniques that incorporates training in self-defense, philosophy, character development, art, internal and external health and culture. It encourages the development of character and strives to achieve excellence physically, mentally and spiritually.